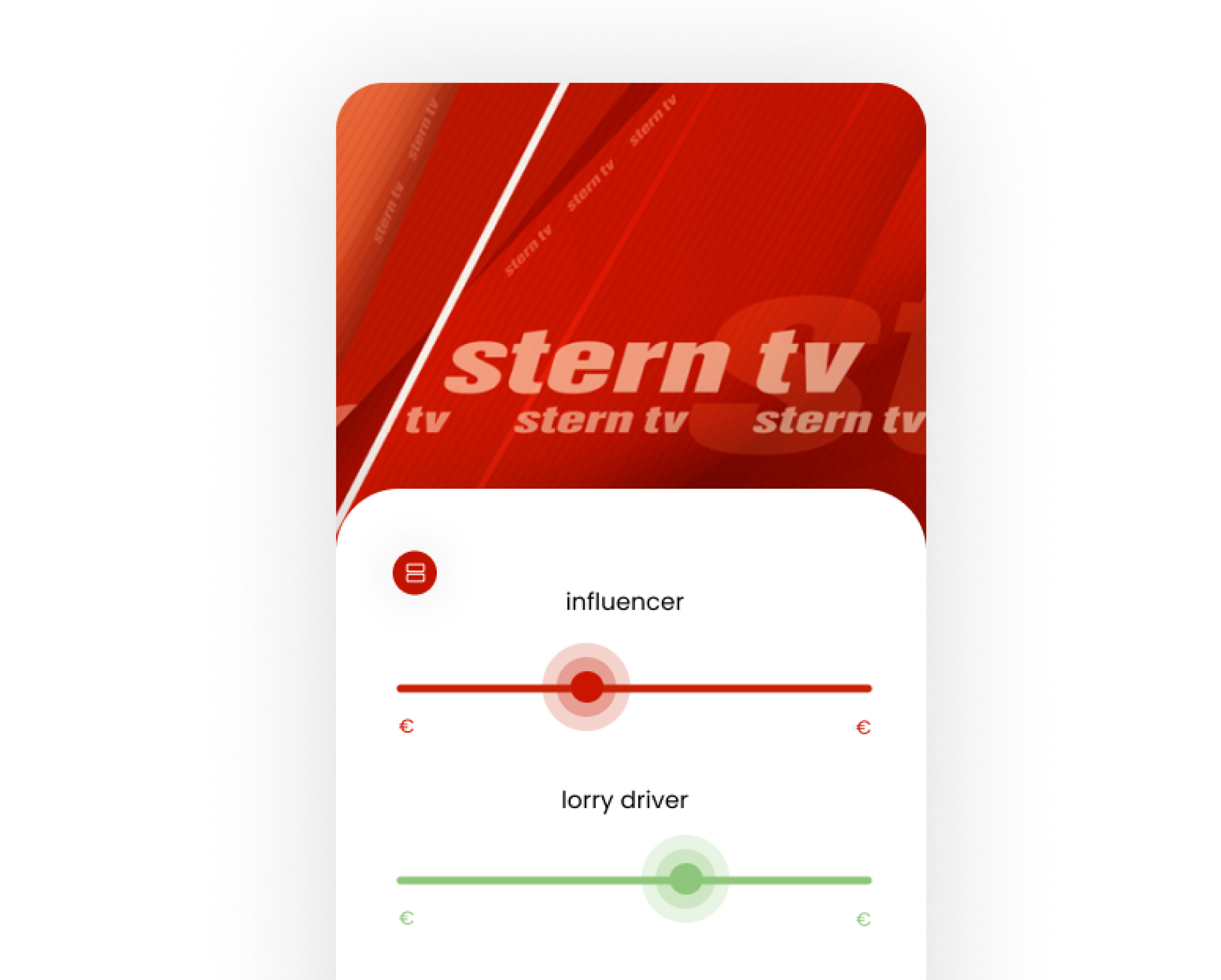 Nobody likes to talk about money - at least not in public. stern TV Spezial wanted to break this taboo and had people discuss fair wages in the programme. The special feature: This time, the audience at home could also take part in the programme and vote live with the help of reaction.link.

How much does a hairdresser earn? Or a lorry driver? Or an influencer? And is that actually fair? That was the topic of the evening in the stern TV special programme Was verdienst Du? - The salary experiment on 28 September 2021. Not only was it revealed who earns how much per month in various professions. There was also a debate about who earns an appropriate salary, too much or too little. For the first time, viewers in their living rooms at home were to be included. But that was not so easy for the producers of stern TV.

The wish: More interactions with the viewers of stern TV Spezial.

stern TV has been an integral part of the German television landscape since 1990. Hardly anyone is unfamiliar with the investigative format. From the beginning, Günther Jauch hosted the programme until it was taken over by Steffen Hallaschka in 2011. stern TV repeatedly takes on fates and taboo topics and has had many prominent guests as guests, such as Michael Gorbachev or Michael Schuhmacher.

Creative producer and reporter Violetta Blank has been working for stern TV for about six months. Her job includes telling touching stories, uncovering sad fates or initiating social debates. For stern TV Spezial, she was looking for a tool that would allow her to interactively involve viewers in the programme.

Too many applications and self-created solutions complicate the producer's work

Together with her team at stern TV, she was faced with the task of letting viewers participate in the programme live at home. But it was unclear for a long time exactly how this idea was to be technically implemented.

Until then, the producers of the programme had used a tool from a Swiss agency, but it didn't have the scope of services to cover all their needs.

"Therefore, in addition to the agency's tool, we worked with several other self-built solutions from the control room and IT. So we had a lot of different solutions that didn't always work well together," the creative producer reports.

So Violetta went in search of software that could perform all the functions she wanted. A colleague from her production company then recommended ReactionLink to her.

"I asked our internal digital department which tool would enable the polls and feedback options for the viewers of Youtopia. It turned out that ReactionLink was used for this purpose. So I decided to test the software at stern TV Spezial," says Violetta.

In cooperation with the co-founder of ReactionLink, Dominik Scherm, viewers at home were asked to slip into the role of a personnel manager and judge which jobs should be paid better or worse.

For this purpose, a QR code was displayed live during the stern TV special programme, which the viewers scanned with their smartphones. Alternatively, the audience could also call up a web link. This redirected the viewers to the online salary regulator of ReactionLink. No download, login or registration in the app was necessary.

70,000 of the nearly 2 million viewers voted on their TV sets at home.

ReactionLink made it possible for "Germany's first comedy hacker" Tobias Schrödel to report live on stern TV about the interim results of the vote. Viewers voted, for example, that hairdressers, who earn an average of 1,800 euros a month, should get about 300 euros more in pay. In total, about 70,000 of the 1.9 million viewers voted live during the programme on fair wages in various professions.

ReactionLink withstands the onslaught of viewers

This was a challenge that should not be underestimated: All viewers accessed the salary regulator online more or less simultaneously. This was no problem for ReactionLink: the servers withstood the onslaught of viewers during the programme without any problems.

When almost two million viewers spontaneously want to participate, you want reliable and scalable tools. With ReactionLink we got through all the extremes safely – Production Manager Marc Warbeski from stern TV

‍
The production team of stern TV Spezial was asked by the reaction.link team after the end of the programme: How do they rate the support from co-founder Dominik? Were you able to use the software without any problems? And above all: Did the additional interaction with the viewers at home enrich the programme?

Creative Producer Violetta has a very clear answer to this: "Dominik accompanied us from the idea to the live TV event. The look and the user-friendliness of the survey tool have given stern TV Spezial a decisive added value that we no longer want to do without in interactive broadcast formats!"

Steffen Hallaschka, the well-known face of stern TV, is also enthusiastic about ReactionLink: "The direct input from the viewers has enriched the talk show. We immediately incorporated the survey results into the conversations and thus livened up the discussion in the programme!"

With reaction.link, stern TV remains competitive even in the age of streaming services

Since the baptism of fire with the reaction.link salary regulator worked so smoothly, Violetta wants to use the tool again in the next stern TV special programmes: "We now want to use QR codes and surveys to involve viewers in the programme more often, so that linear television becomes more competitive again - especially with the younger generation."

Do you also want to make your programme interactive with reaction.link?
Just ask reaction.link co-founder Dominik Scherm about the range of functions, individual features and costs. You will be surprised how versatile the software is!